In Panama Hattie, the brassy but gold-hearted proprietress of a Canal Zone hotel, where she performs, is used to a rough-and-tumble crowd of sailors.  But she falls for a wealthy socialite soldier, and doesn’t know how to handle herself.

Hattie Maloney (Ann Sothern) is a gaudy, good-hearted nightclub singer who tends to love above her station. This time, it’s pedigreed officer Dick Bulliet (Dan Dailey, Jr.), and it’s for real. But there’s one little problem: he’s got a small daughter so ladylike she makes Emily Post look like Tugboat Annie – and she’s not impressed with Hattie’s bangles and bows. And Hattie’s got a trio of protectors, three goofball gobs who think that maybe Hattie’s too good for Dick.

This World War II musical sparkles with Cole Porter numbers like “Just One of Those Things,” classic buffoonery from Red Skelton, Ben Blue and Rags Ragland as Hattie’s spy-hunting sailor pals and – last but not least – the screen debut of Miss Lena Horne. Can a salt-of-the-earth gal capture a society guy? Of course she can – and getting there is half the fun!

Hattie Maloney (Ann Sothern): They’re from the other side of the tracks, and I don’t want to get run over crossing! 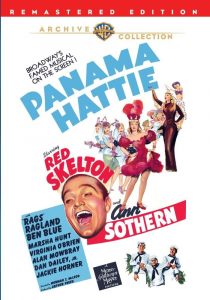